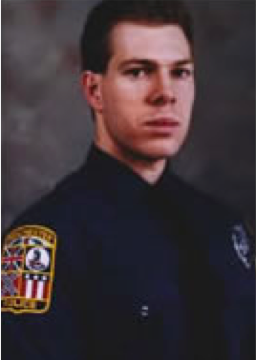 On October 29, 1999, Winchester Police Sergeant Ricky L. Timbrook was fatally wounded while in foot pursuit with Edward Nathaniel Bell. During the pursuit, Bell turned around and fired one shot from a .38 caliber handgun striking Sergeant Timbrook in the forehead killing him instantly.

Bell was charged with Capital Murder for Sergeant Timbrook’s death. On January 25, 2001, Bell was found guilty after a seven day trial. He was ultimately sentenced to death. On February 19, 2009, Bell was executed by lethal injection at the Greenville Correctional Center in Jarratt, Virginia.

Sergeant Timbrook was 32 years of age at the time of his death. He is survived by his wife Kelly Wisecarver-Timbrook, son Ricky Lee Timbrook II, father Richard Timbrook, mother Kitty Timbrook, and sister Kimberly Hudson. Sergeant Timbrook was an exemplary officer who had recently been promoted to supervise the newly formed Special Enforcement Team. During his eight year career, he served as a DARE Officer, a Field Training Officer, a Defensive Tactics Instructor, and a SWAT member. He received numerous commendations, awards and recognition for his law enforcement service.

In November 2002, the Timbrook Public Safety Center, which houses both the Winchester Fire and Rescue Department and Winchester Police Department, opened its doors and dedicated the building in Sergeant Timbrook’s honor. Across the street is the area in which Sergeant Timbrook was slain. In May 2003, this area was converted into a beautiful play area and named the Ricky L. Timbrook Park.

Additional Contributions from the public can be made to: 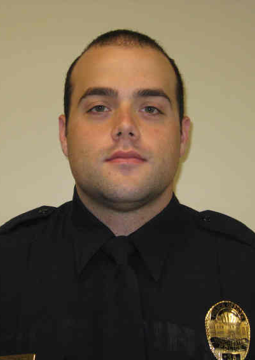 Officer Hunter Edwards was responding to a fight call on November 24, 2018 when he lost control of his cruiser due to unexpected icy road conditions and crashed on the Delmar Robinson Memorial Bridge (Jubal Early Drive). Despite efforts by fellow officers and EMTs to save his life, Officer Edwards perished as a result of his injuries. He was 30 years old.

During his four-year tenure at the Winchester Police Department, Officer Edwards was a member of the SWAT team and Civil Disturbance Unit. He was the recipient of numerous awards and citations, including the Mothers Against Drunk Driving Award.

Officer Edwards will be remembered by his colleagues, friends, family, and the community as an exemplary officer – one who could be counted on in the most difficult of situations. His unexpected death resonated deeply throughout the department, community, and region, with hundreds of law enforcement professionals, family members, and friends gathering at his memorial service and along the procession route to pay their final respects.

At the time of his passing, Officer Edwards was a newlywed and is survived by his wife and son.

The Winchester-Frederick County Law Enforcement Foundation partnered with City National Bank to establish a fund in Hunter’s memory that would assist his family in their time of need. Donations are collected at the Winchester and Stephens City branches or by mail: