The Patrol Division is led by Captain Douglas Watson, who reports directly to the Deputy Chief of Police. The division is comprised of three shifts that are supervised by a lieutenant and at least one sergeant. Officers assigned to the Winchester Police Department are normally the first responders to calls for service. The goals of the Patrol Officer are to prevent and suppress crime, protect lives and property, apprehend and prosecute offenders, and try to preserve peace.

The Patrol Officer is responsible for exerting every effort to satisfy the needs of citizens requesting service, assistance, or information and when necessary make reports of crimes, vehicular accidents, and incidents. Patrol Officers familiarize themselves with their assigned areas and conduct diligent patrol, focusing on the prevention of crime, and building positive community relationships.

As the first responders, Patrol Officers conduct a thorough initial investigation, collect evidence, and record data which will aid in the identification, apprehension, and prosecution of offenders and the recovery of property.

When to call an ACO: 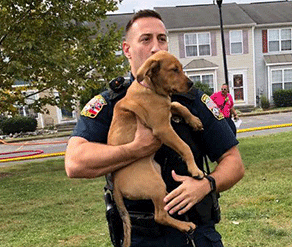 ACOs can help with:

Nuisance wildlife such as the animals listed below are the responsibility of the property owner unless they are sick or injured or appear to have rabies. If they are not sick, injured or have rabies, contact a pest control company or licensed wildlife trapper to have them removed, if desired. Visit https://www.dgif.virginia.gov/ for a list of wildlife trappers. 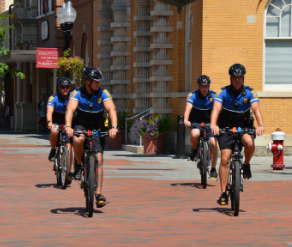 The Winchester Police Department Bicycle Patrol was formed in the spring of 1995. Bike Officers receive specialized training for using and riding bicycles to patrol areas that have high crime, drug problems, and anywhere that is difficult to access by marked patrol vehicles. The Bike Patrol is also utilized in many other ways such as parade escorts for celebrities and diplomats, traffic control, Bicycle Safety Classes for children, and other special events.

Bike Officers perform the same duties as officers in patrol cars. Utilizing bikes as a proactive policing technique provides officers with a “stealth” advantage because they are silent. Bikes are also less visible than a marked patrol vehicle, thus bike officers can ride right up to the scene of a crime before they are noticed.

Bike patrol is a great resource for the City and the Department. Officers have the ability and are encouraged to patrol on bicycles whenever possible.

The highlight of the Patrol Division is our K-9 team, which is a community favorite. The Winchester Police Department is fortunate to be supported by four canines.  Three are assigned to patrol duties and are trained in narcotics detection. One is assigned to explosives detection. Canines and their handlers go through several months of training in order to be certified and maintain their training on a monthly basis. The partnership and bond between the canine and their handler is like none other.

The Winchester Police Department promotes safety and prevention of juvenile delinquency by supporting Winchester Public Schools with two school resource officers. The role of an SRO is a complex one, as they must maintain separation between administrative and criminal matters while also being approachable and engaging. Our school resource officers are assigned to Daniel Morgan Middle School and John Handley High School. They also regularly visit and work with staff and children at the four elementary schools.

The Special Weapons and Tactics Team (SWAT) is responsible for handling situations that require extraordinary police actions, tactics, or equipment.  The goal of the SWAT team is to resolve incidents while limiting citizen and police personnel to the dangers associated with the incident.  The team is responsible for, but not limited to, handling the following events: high risk search warrants, high risk arrest warrants, barricade suspects, hostage situations, tactical operations, and crowd control duties.