The driver of the Saturn, identified as Charles Leldon Shelly, III, 41, of Frederick County, was charged with second offense driving under the influence of drugs, driving on a suspended license, possession of drug paraphernalia, and probation violation. He is being held without bond at the Northwest Regional Adult Detention Center.

The police cruiser and Saturn were towed away from the scene with substantial damage. The third vehicle sustained minor damage. One WPD officer was transported to Winchester Medical Center where he received treatment and was later released.

In 2018, 21% of the total number of traffic crashes in the City of Winchester occurred during the months of November and December. Today’s crash serves as a reminder to area residents to be vigilant while driving, especially during the holiday season when shopping and traveling traffic increases. 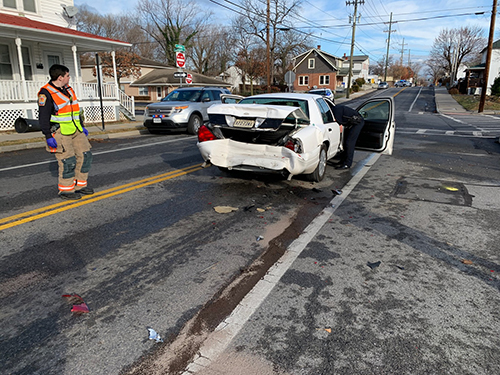