Winchester Police Chief John Piper is pleased to announce the promotion of Lieutenant Wally Stotlemyer to the rank of Captain.  Captain Stotlemyer began his law enforcement career with the Winchester Police Department (WPD) in 1998. His assignments included establishing and leading the Community Resources Team and being the team leader for the Northwest Virginia Regional Drug Task Force.  He has also served as a Lieutenant in the Patrol and Administration divisions.  Captain Stotlemyer currently serves as the Commander of the Patrol Division, which includes animal control, canine, and school resource officer programs. 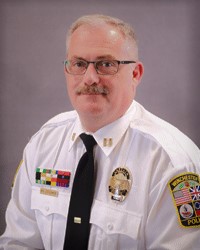