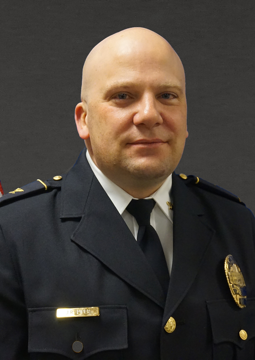 Chief John R. Piper has over 25 years law enforcement experience and was named Chief of Police for the City of Winchester on September 1, 2017, after a comprehensive national search process. Chief Piper spent over 23 years with the Fairfax County Police Department in Fairfax County, Virginia. His final assignment with that agency was as the Director of the Fairfax County Criminal Justice Academy, where he oversaw all training for incumbent officers and deputies, as well as basic training for new recruits. Chief Piper also served as a Patrol Bureau Commander in that agency. In that role, he oversaw three of the agency’s eight district stations and a staff of over 400 sworn and civilian personnel. Chief Piper commanded several units and divisions throughout his career with FCPD, to include serving as the Commander of the Criminal Intelligence Division, where he was appointed Director of the Northern Virginia Regional Intelligence Center (NVRIC). He was granted a Top Secret National Security Clearance in his role as the center’s Executive Director. Chief Piper also oversaw many successful long-term, complex undercover investigations and directed a multi-million dollar budget of seized asset accounts.

Chief Piper’s other command assignments with FCPD include being assigned as a Station Commander, where oversaw a staff of over 130 personnel responsible for patrolling 70 square miles in western Fairfax County. He took pride in his ability to engage a diverse community during his tenure, and in his “results driven” approach to police leadership through accountability and integrity. Other assignments throughout Chief Piper’s distinguished career include working as a detective in the agency’s Organized Crime and Narcotics Division, being assigned to multiple federal task forces, commanding the agency’s Investigative Support Division, which included of the Crime Scene and Electronic Surveillance Sections, and working in the agency’s Department of Public Safety Communications as a Police Liaison Commander.

Chief Piper received his Bachelor of Science Degree in Administration of Justice from George Mason University and earned a Graduate Certificate from American University in the Key Executive Leadership Program in 2008. He has also successfully completed many other leadership-training classes, to include the West Point Leadership Development Course and the Police Executive Research Form’s Senior Management Institute for Policing. 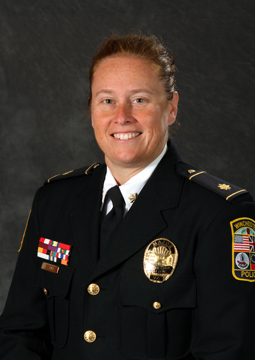 Deputy Chief Kelly S. Rice has served the Winchester Police Department since 1995 and was appointed as Deputy Chief of Police in 2012. All 5 divisions within the Winchester Police Department report directly to Deputy Chief Rice. In her role, she has implemented several programs to include the Peer to Peer support team, Civil Disturbance Team, and the Honor Guard Unit. One of her greatest accomplishments has been the development of a proactive law enforcement and mental health case management program to reduce the number of crisis encounters resulting in violence.

Deputy Chief Rice managed the trial and full implementation of the body-worn camera program. Additionally, she worked several years on a committee to develop a state of the art citywide radio system that is in place today. She has served as the Captain of Administration, Investigations, and the Patrol Division. In 2007, she created the Department’s Crisis Negotiations Team and remains the Team Commander.

Deputy Chief Rice has a Bachelor of Science Degree in Social Work from Shippensburg University. She is a 2009 graduate of the Police Executive Leadership School and a 2011 graduate of the FBI National Academy. Deputy Chief Rice is actively involved in the community as a board member of the Youth Development Center and Shenandoah Valley Drug Coalition. She coordinates the annual Sergeant Ricky Timbrook Food and Toy Drive. She is volunteer coach in many youth sports and was inducted into the James Wood High School Hall of Fame.